DEHART CONSULTING has structured a strategic and innovative relationship between Fujitsu's corporate entity in Japan, its US counterpart in San Jose, and a foundry supplier in southern California that will serve as the foundation of a world class domestic operation...

Using Standard Labor/Machine Processing Hours
In the case where all units in a WO are processed as a discrete set, the Flow Time of a WO in a WC is equal to the Standard Process Hours of the WO. 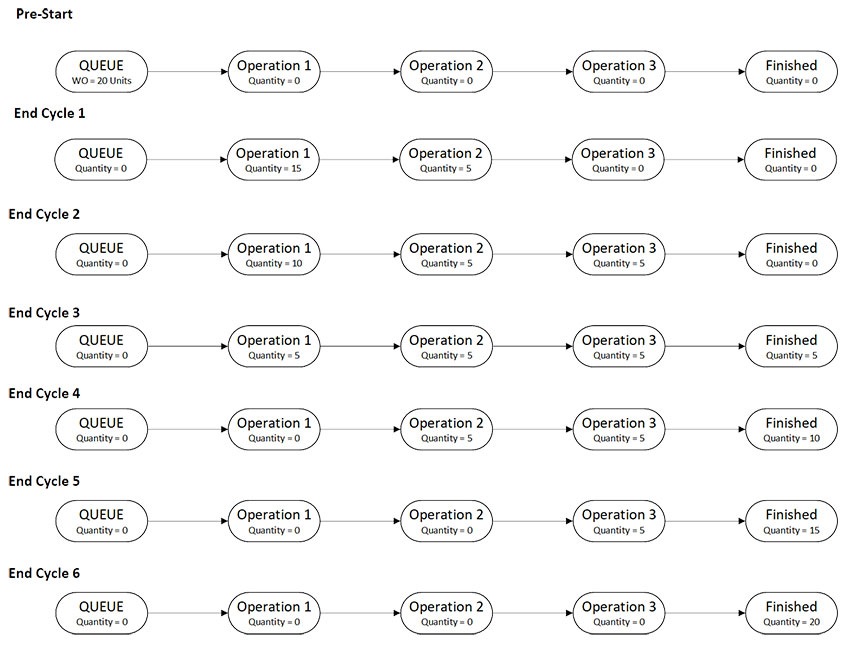 For example, a WO with a Standard Hour per Unit (HPU) of one-hour per operation, or three hours total.  The total Standard Hours for this WO is then sixty hours and, if worked on at a single operation, or even moved from operation-to-operation as a single batch, the Flow Time would indeed be sixty hours.  But when the WO is split into smaller batches, and moved from operation-to-operation as each batch is completed, the simultaneity of work activities will tend to compress the Flow Time.  In the example shown above, each batch would move every five hours, the operation cycle-time or takt time, and the WO would complete queue-to-finished after six cycles, or just thirty hours, 50% of the Standard Hours.  Thus, this Flow Time compression effect should be taken into account in the case of sequential batch-processing.

The Flow Time of a WO at a WC is an essential component in this disclosure and is embodied in the previously defined variables tWO1, n-1, tR,N, QN, YN, tR,N-1, and tQ,N-1.  To account for the serial-lot-split case illustrated above, an adjustment to convert Standard Hours to Flow Time is applied to these factors on a WO-WC basis.

In particular, an adjustment is made and it should take the form of a ratio that can be applied to the Standard Process Hours:

This ratio will vary at each WC and for each WO based on batch sizes and numbers of operations and is derived as follows:

The batch size that is processed through the WC for a WO is the quantity of units within the WO divided by the number of batches into which the WO is to be split, BN.

In a balanced line, the operation cycle-time for each batch is equal, or nearly equal, for all operations and is the HPU for the WO divided by the number of operations, ON, (to give HPU per operation) multiplied by the batch size. Expressing this in terms of a single batch gives:

Clear Time can be computed as the number of batches times the OHPB.

Alternatively, this variation is used to calculate QN, tR, N, and tR, N-1 in the pull-test algorithm, by substituting equation 5 for the value of OHPB, and Clear Time can be expressed as:

The Flush Time is the time required for the last Batch to get though the rest of the Operations, not counting the first one since it was counted in the Clear Time, or

Adding the two segments together yields the following:

The denominator of the ratio R from equation 3, Total Standard Hours (WOSH), will equal the sum of the amount of time that each batch spends at each operation. This can be expressed as a simple multiplication of the number of batches by the number of Operations and by the Operational hours per batch.

Now that both the Total Standard Hours and Flow Time are represented in terms of Quantity, Number of Operations, and Batch Size the ratio between the two values can be calculated. This ratio is the conversion factor for converting Standard Hours into Flow time from equation 3. Substituting the results from equations 11 and 13 into equation 3:

Using equation 4, these values yield 4 for the number of batches that will flow through the WC:

Using equation 12, this gives a value of Total Standard Hours of 60: 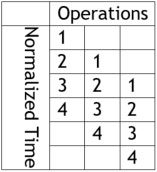 plots Operations on the horizontal with time on the vertical. The numbers symbolize the Batch number and their flow within the WC. The boxes symbolize all of the Standard Hours. Notice that if all the columns are shifted up to form a rectangle the Total Standard Hours formula becomes a simple area calculation.

The implications for the present system are that when serial lot-splitting is operational, this calculation is done for each applicable WO and WC, and the values of tWO1, n-1, tR,N, QN, YN, tR,N-1, and tQ,N-1 are adjusted accordingly.  References to Flow Time for a WO in this context refer to:

When CN or CN-1 is greater than 0, WOs may be split and run through multiple paths in the WC.  This causes Flow Time to contract depending on the number of paths through which the WO is processed. When a lot is split when started, the present system first checks to validate the number of paths through which it is split versus the value of C in the WC, and then adjusts the Flow Time based on the ratio of the largest quantity sub-lot versus the # Units in the WO, RC.

In this case, R can be further generalized as

There are other variations and combinations of lot-splitting cases that will also result in deviations between Flow Time and Standard Process Hours.  The derivations of these adjustments are not presented herein.

* The HP, KVH, CalAmp, Xilinx, Fujitsu, Emulex, and Harmonic logos are registered trademarks of their respective corporations in the U.S.
© 2023 All rights reserved. Designed & Developed by SOHO Prospecting.