DEHART CONSULTING, INC., working hand-in-hand with our factory personnel, redesigned our manufacturing areas and material flows to enable a 250% growth in output with only a 70% increase in floor space. Additionally, the changes were documented, implemented, and provided a clear path for future expansion.

The Figures below illustrate an embodiment of the demand-pull system, which can be implemented using a software system with a database.  In this embodiment, a .NET service bus and MSSQL database running on a networked Microsoft Windows server are connected via the local area network (LAN) to individual clients in the various WCs.  These clients contain the browser-based AngularJS user interface and connect with the service bus through its Application Programming Interface (API). 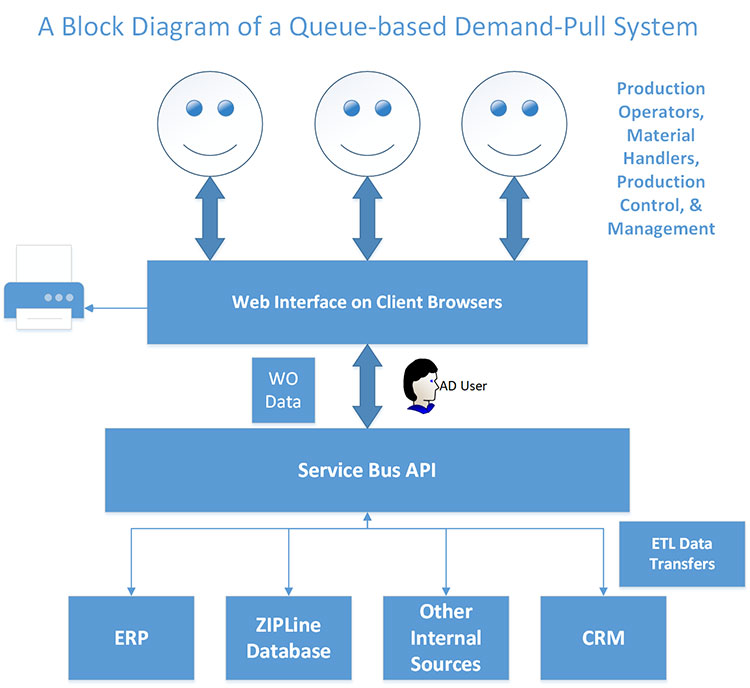 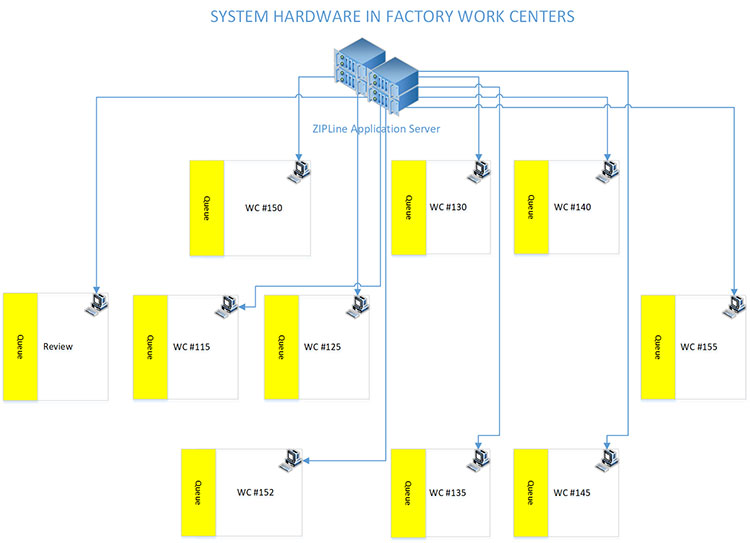 Likewise, other enterprise-level software applications (ERP, CRM and so forth) interface with the software implementation and can inject new WOs and extract data on those WOs as they flow through the factory.  The demand-pull system can include an Enterprise Resource Planning (ERP), Materials Resource Planning (MRP) or other similar system that creates WOs for parts to be produced by the factory.  This system should also be capable of storing the associated operation sequence (Workflow), the WCs associated with each operation in the Workflow, standard processing hours per unit (HPU) at each operation, and quantities of units (# Units) to be produced.

WOs and their associated data (Workflows, HPU, # Units, and Batch sizes, if applicable, at a minimum) are then introduced into the demand-pull system.  Initially, WOs have a Status code of "Pending" and when ready to begin production, the WOs are accepted into production through the demand-pull system user interface, which action changes the Status to “Open.”  When a WO is accepted, a time-stamp is created and it is “moved” to the Queue of the first operation in the Workflow.  This is the beginning of the "demand-pull" production process.

When demand is detected at the next WC in the WO's Workflow, the WO is assigned a Pull Tag, which authorizes work activities at the first operation in its Workflow.  This "detection" can be based on an affirmative result to the aforementioned test in Equation 22:

Where, in this case, N is the next WC in the WO's Workflow.  This test is done in the demand-pull system software through continuous polling of all WCs in the factory, as well as instantaneously any time a WO is Started or Finished at a WC.  In other words, when a WO is started into production at a given WC, the system immediately "looks" upstream for a candidate WO to refill its queue. Likewise, when a WO is completed and moved to its subsequent WC’s queue, a pull-test is performed both upstream and downstream to detect demand.   When a pull-test is performed on a WC, a record can be logged with a time-stamp and the order of polling of the WCs can be based on this time-stamp.  The WC with the oldest time-stamp can be polled first.  The polling frequency is a user-defined interval in the demand-pull system.

All the parameters of the demand-pull system are tracked, or calculated (such as by the software) on each execution of the Pull-test.  The relevant parameters can include:

In addition, some of the calculated values are based on other parameters that are system generated or stored in the database.

Likewise, tR,N-1 is a similar calculation done on the WOs in WCN-1 to determine the remaining Clear Time for the WO in WCN-1 with the least Clear Time remaining.

tQ,N-1 is the sum of the Clear Times for WCN-1 for all WOs in its queue that have been assigned a PT.  Since this calculation depends on the demand-pull system’s ability to determine which WOs have WCN as the next WC in their Workflow, the demand-pull system stores all the operations in the WO's Workflow as well as the sequence of those operations and their associated WCs. Then it stores in its database all PTs, their associated WOs and WCs so that it can identify the WOs that are UA to WCN and that have been authorized for production in their current WC (assigned a PT).

Likewise, YN relies on calculating its Clear Times for WCN and relies on the association of PTs.  This calculation knows that:

a. a PT has been assigned to the WO; and

QN and WN are calculated on the basis of Clear Times, since no PT association is needed for these two values.

A flowchart of the pull-system logic is shown inthe Figure below. Explanations of the terms used therein are found in the Table of Definitions. 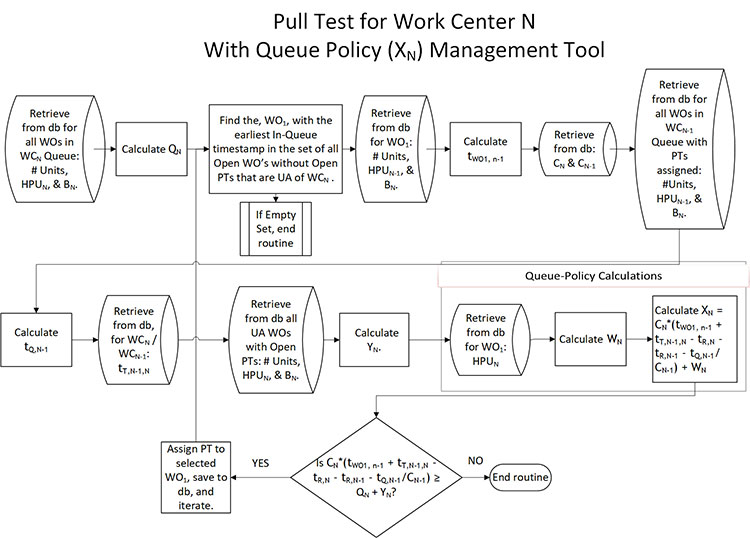 * The HP, KVH, CalAmp, Xilinx, Fujitsu, Emulex, and Harmonic logos are registered trademarks of their respective corporations in the U.S.
© 2023 All rights reserved. Designed & Developed by SOHO Prospecting.